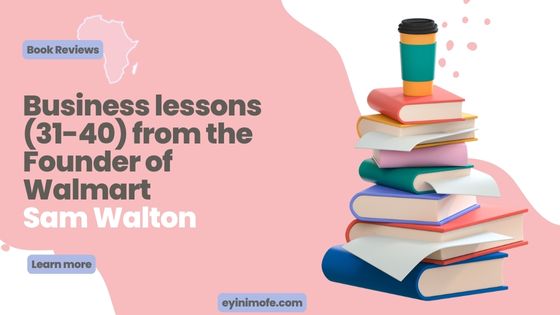 When Sam was writing his autobiography in 1991, Wal-Mart had already spent $700 million on building their current computer and satellite systems.

It is very important to note that it is good people who run and make good technologies work. Saying that however, Wal-Mart could not have achieved the level of success and expansion she enjoyed without having those computer systems. I guess the moral of the story is that money invested in technologies can be a big plus with the right strategy in place.

Read one of our top posts: BusinessAccording to Sam, before Wal-Mart became a Multi-billion dollar company, when they only had only five stores, they spent only 2% of their sales revenue on their costs. lessons (1-10) from Sam Walton’s autobiography

32. Being the best can make you the biggest

Sam wanted to be the ‘best‘ retailer in the world not the ‘biggest‘.

Is it possible to aspire to be the best in your chosen path without wanting to be the biggest? I believe that based on a start-ups long-term mission, vision & strategy, being the best and biggest can co-exist.

33. Sometimes being big is bad

According to Sam one of the disadvantages of being too big is that a company becomes slow to react to the changing needs of her customers.

The above reminds me one mega-corporations: ‘blockbuster’. Blockbuster was too slow to react to the changing needs of her customers and unfortunately lost massive markets share to a small newcomer, like Netflix.
Btw: Blockbuster even had the opportunity to buy Netflix from the founder but Blockbusters’ top management turned down the founders offer. Blockbuster is no longer in business.

According to Sam, the bigger Wal-Mart got, the more essential it was for Wal-Mart to think small.

According to Sam, the way to become a huge corporation is not to act like one.

How do huge corporations act? The way I answered that question is by looking at how Wal-Mart acted. Walmart claims to be a customer focused company. According to Walmart, Customer, not the corporation, is king. Treating your customer like king is how not to act like a huge corporation.

36. Money is not the ultimate goal

According to Sam creating a personal fortune was never his goal.

According to Sam most of the family wealth still remains in Wal-Mart stock.

It is very obvious that Sam Walton believed in Wal-Mart because he invested and kept investing in the company. The reason all his family members are still on the Forbes billionaires list today is because the Walton family hold the largest amount of Wal-Mart stock. The best way to show you believe in something is to put your money where your mouth is, and keep it there. Sam did just that.

38. Have a reward system

Sam showed that it was not enough to ask staff to be innovative and come up with cost saving initiatives; they needed adequate reward outside their normal salary. There was a Wal-Mart staff who had a big cost saving initiative for the company. She was not rewarded with words alone, but she was rewarded financially as well.

I believe that openly rewarding good behaviour/contributions from your associates, might indirectly encourage other people in the organisation and cause them to try to emulate the rewarded behaviour. Checkout lesson 12 of the COZA post here about ‘rewarding associates’.

According to Sam, before Wal-Mart became a Multi-billion dollar company, when they only had five stores, they spent only 2% of their sales revenue on their costs. Walmart maintained this even when they had over 2000 stores and a lot more money to spend.

As admirable as this position is, it may be hard for a company set up in Nigeria to maintain such a level of discipline and such a lean budget because of uncertainties like exchange rate fluctuations etc. Checkout lesson 14 of the COZA post here about ‘costs’.

40. Be principled in giving

The Walton’s were very principled about their “giving”. They were not “inclined to give any undeserving stranger a free ride” rather they had heavy emphasis on education.

There comes a point in every organisations life/founders life where giving out money to people and/or causes is just as important or even more important than just amassing money. Checkout lesson 18 of the COZA post here about ‘giving’.

Start and Stay Insightful. To get regular notifications of our new posts, please click the ‘follow button‘ on the top right corner of this page. Thanks

Self Made Review: The 10 excuses Madam C.J. Walter didn’t let hold her back