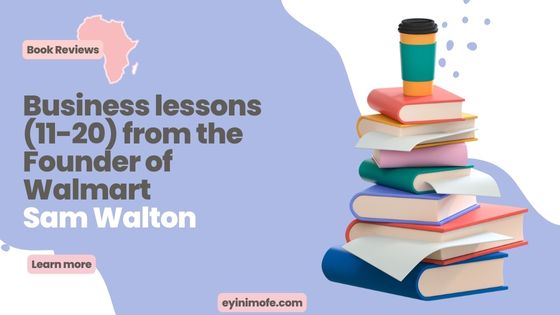 According to Sam, having the right people in the right job when they were needed the most has marked Wal-Mart’s history.

From the above it seems like it is possible for ‘right people’ to look like ‘wrong people’ because they are either not in the ‘right jobs’, or they were not hired when they were needed the most.

This is also another well-known hiring secret that Sam and his brother Bud practiced: “hire folks with qualities you don’t possess.

I believe it is not the easiest thing to do. Society has trained us from a very young age to gravitate towards the familiar. We pick friendships and relationships based on familiarity, but businesses cannot be built that way.

13. Get the best exposure

According to Sam, everyone in the company needs as much exposure into the affairs of the company as they can get. The people who get the right exposure generally make the best executives in future as they have the best overall view of the company.

This philosophy is not only great for startups, but it is also used in big corporations as well. My sister currently works for a big oil servicing company that practices this philosophy as well. They call it ‘rotation’. She has worked in about 3 different departments since she was employed.

Wal-Mart is very big on working as a team. Sam could not have achieved one-tenth of the things he achieved without a good team.

15. Change for the sake of Change

Change is a vital part of Wal-mart’s culture. Sam understood that it was human nature to get used to doing things a certain way, think it’s the right way, and not even think of trying it a different way. So, Sam sometimes made changes for the sake of change alone. He believed that for Wal-Mart to survive, a constant change was necessary.

I believe it might be harder for an organisation to respond to external changes when it has not mastered the appropriate response to internal changes.

Sam created such a great culture in Wal-Mart that he claimed his early managers did not mind driving all the way to the head office every Saturday morning for the managers weekly meetings.

Creating a good company culture is an art that has to be learnt, especially when building a company that requires exceptional dedication from associates.

Sam understood that it was a stretch for people to come in on a Saturday for morning meetings when they could be with their families, so, he made sure those Saturday meetings were unpredictable. Sometimes, amongst other thing, comedians were brought in to entertain everyone during the meeting.

As they say, all work and no play makes Sam Jack a dull boy.

18. Have a Corporate Chant

Still on this ‘Saturday meetings’ business, there was a chant or hog that all those present at the meeting shouted before the meeting commenced. One of the chants ended with “who’s Nos. 1? – Customers”.

You thought the answer would be “Wal-Mart” right? I thought so too … *sign*. This here might be one of the reasons why Wal-Mart has outlived many that came before it.

According to Sam, the secret of successful retailing is to give your customers what they want.

Me: do I reallllly have to give them everything 🙁? Everything:(? At whose expense?

Sam: wellllll, you don’t have to, just tell your customers to say hello to your competitors as they leave your company. nuff said!!

20. The laws of Attraction

According to Sam, something has to attract people to your store. Sometimes it could be one, or a combination of factors, like a store keepers personality, price of goods, freshness of goods, an ice cream machine in front of the store and so on.

Note to self: make sure you know the major attractions customers have to your product/company, and continually improve upon it.

Maybe the above lessons are not be applicable to every startup, however I believe at least one should be kept in mind and incorporated .  As for me  I absolutely love lessons 13 and 20 the most, and they are both on my consciousness list. Which lessons do you like the most, or think is the most important in a startup?  Please share your thoughts in the comments section below.

How to work for yourself by Bryan Cohen. 6 Important Takeaways