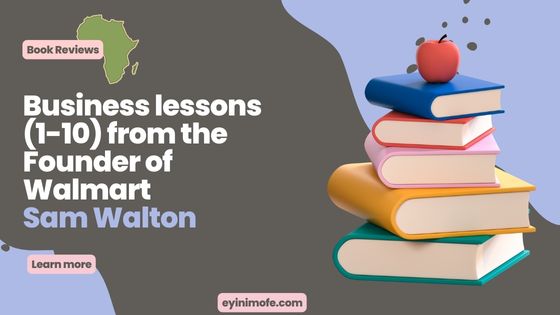 M.I.A aka Made in America was my book of the month for February 2016. Made in America is Sam Walton’s autobiography written and published before his death in 1992. Many of the contents of the book are told in Sam’s own words and also through contributions from family, friends, and associates.

He is known as one of the greatest American entrepreneurs, and through M.I.A, Sam shared many life stories from his Wal-Mart journey that contributed to the growth of Wal-Mart from one (1) store on 7th July 1962 to one thousand nine hundred and sixty (1,960) stores at the time of his death in April 1992.

Click the Walmart website for a more detailed timeline of Wal-Mart’s history. However, see below a startupdemands.com chart showing Walmart’s growth from inception in 1962 to 2016, and also the amount of fortune Wal-Mart has created for the Walton family.

Sam read everything he could lay his hands on about retailing before he opened his first variety store (a Ben Franklin franchise) at the age of 26. In spite of his retail knowledge, however, his first major mistake when running that store was not a retail mistake, but a legal one. He did not have an ‘option to renew’ his store’s lease, so, when his landlord saw his great success, he refused to renew the lease. The landlord instead bought Sam out of the franchise right and the store’s inventory and immediately began operating the business. (Watch out for Lesson 23 in this 6 part series to see how Sam took revenge 20 years later).

My questions are as follows: “how much knowledge is enough knowledge for you to start a business?”  and “how many people really read legal agreements before they sign them, or at least get a qualified lawyer to read them?” Your answers are welcome in the comment section.

2. To thyself be true

Sam knew his strengths and his weaknesses. Many times in M.I.A Sam unashamedly showed that he wasn’t an innovator. Many things that Wal-Mart and Sam’s early Ben Franklin stores implemented were things Sam had seen and copied from other stores. For instance, when Sam found out that one store across the country started a ‘self-service’ service in their store, he drove all the way to the store to see what and how they operated their ‘self-service service and he introduced the service in his own stores. Also, he accepted the name ‘Wal-Mart’ name a friend suggested because he really liked the name ‘Sol’s Fed-Mart’ used by another store. Sam actually made friends with Sol’s son-in-law, who was running a distribution center, so that he could learn about distribution and incorporate it into Wal-Mart. Sam attributed many of their early success to what they saw Sol’s Fed-Mart do.

Please can anyone tell me what in the world happened to Sol’s Fed-Mart? Long and short of it, by 1982 they went out of business.

If you have to copy, pls pls pls, for the love of Sam, ‘copy well, but also improve what is copied’ Plsss no ‘Nikes’ with two swooshes. What’s the best and worst idea rip-off you’ve seen? Share with me in the comment section below.

3. Don’t be too important to be appraised

Sam and his managers had appraisals every Saturday morning. Everyone had self-appraisal, from Sam to the newest manager. They all talked openly about their triumphs and their mistakes of the week. They never dwelled on their mistakes. They had a practice of moving on quickly.

As long as you are not running a dictatorship, I believe that one of the marks of a great leader is that he/she is secure enough to receive feedback from those following.

4. Have a company culture

Sam created a company culture in Wal-Mart and he communicated this culture largely by his words and his actions, and not by words alone. This culture stood in and out of Wal-Mart shop floors, and also affected Wal-Marts dealings with suppliers, manufacturers, and so on.

It’s my opinion that if you cannot see or decipher a company’s culture when dealing with them,  chances are their staff can’t either.

5. Before Bill Gate was…

Its common knowledge that Sam held the title of the richest man in America (1982-1988). What however isn’t common knowledge is that in spite of a title like that, he and his family lived a modest life (no extravagance). Sam was very disciplined with money; this discipline came largely because of the way he was brought up. As a kid, Sam had to contribute provisions to the house. He was taught not to just be a taker. He learned the value of $1 from a very early age. He saw firsthand how much hard work it took to make a $1.

Just like Chuck Feeny, the DFS billionaire who gave away all his wealth, Sam traveled economy class. He drove an old pickup truck and bought his clothes at Wal-Mart.

I believe that making money isn’t easy, however, growing money is even harder (just ask lottery winners). It takes discipline to grow money. Btw Bill Gates only became the Nos. 1 richest man in America in 1992 after the death of Sam.

He knew how to hire the right people. When hiring, he considered the short term and (largely) long term. At the beginning of the retail journey, passion and being able to work hard trumped academic qualification, so many of the early Wal-Mart managers were not academically qualified. However, as the company grew, so did its hiring criteria. The more technologically advanced Wal-Mart grew, the higher the skill set needed.

I believe a startup hiring process should evolve as it grows.

Sam called all Wal-Mart staffs ‘Associate-Partners’, from managers to hourly and part-time staff; and he also treated them as such. He ensured this reflected ‘financially’, through ‘basic human consideration (respect)’ and ‘open door policy to approach management with problems’.

I truly believe people, especially employees act what they are called and how managers treat them.

Sam understood the key to effective partnerships. Sam promised to give his managers a percentage of all the profits made from the stores they managed.  This strategy worked for Willard Walker the first manager of Waltons five and dime (later called Wal-Mart), and for many others. When Walmart went public, Willard borrowed an awful lot of money from the bank to buy Wal-Mart shares. He bought the most shares amongst the other managers; an act reflecting how much faith he had in the company and in Sam. He also had an information-sharing policy.

I believe giving managers a stake in the store they managed was genius. A feeling of part ownership could have affected their level of commitment. You will personally benefit if the company does well, so, it’s more likely that you’ll put in your best. Whether this might work as enough motivation for managers in the Nigerian business environment is Debateable.

Staff Appreciation is a very important motivator. Sam found that paying associate partners their regular salary was not enough. He made it company practice to always find something an associate partner was doing right, and to praise them openly.

Well, depending on the kind of work done by the employee, sometimes, while a ‘thank you’ is good, it is not enough. Dear CEO if it is in your power to do more, pls do. If a staff saves your company a lot of money, do you think a ‘thank you’ is enough?

Sam had a very keen interest in Hunting, and whenever he arrived on someone else’s property to ask their permission to hunt their land, he always introduced himself by stating his name and what he does, and he always gave them gifts. This gesture helped create trust, as they would likely go into one of his stores because they knew him as the guy who hunted on their land and gave them gifts.

The above definitely corroborates the famous saying people don’t buy products, they buy people. Also, a man’s gift always makes a way for him.

Feel free to leave comments below on whether you think some or all of the above lessons are statutes of general application or whether geography and/or time had significant parts to play on Sam’s success. My fav lessons are 2 and 3. Do you have any favorites as well?

How to work for yourself by Bryan Cohen. 6 Important Takeaways

7 Powerful Business Lessons From The Romance Novel – ‘A Chance Awakening’